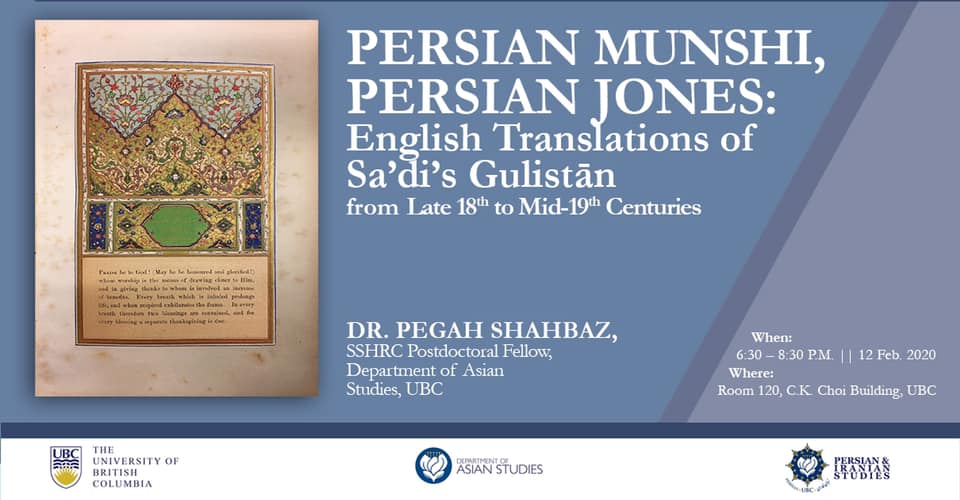 From the seventeenth century, Muslih al-Din Sa’di Shirāzi (d. 1291), a key figure in Persian classic literature, became the center of Europeans’ attention: his name appeared in travelogues and periodicals and selections of his tales were published in miscellaneous Latin, German, French, and English works. To follow Sa’di’s impact over English literature, one should search for the beginning of the “Sa’di trend” and the reasons that led to the acceleration of the translation process of his works into English language in the nineteenth century. This article aims to scrutinize the role of the British educational institutions in Colonial India in the introduction of Sa’di and his Gulistān to the English readership, and in parallel, it discovers the role of the Indo-Persian native scholars (munshis) who were involved in the preparation of translations. We will see how the the British perception of Sa’di’s literature developed in the first half of the 19thcentury and how their approach towards the translation of the “text” and its “style” evolved in the complete English renderings of the Gulistān.
—
Pegah Shahbaz is a specialist of Persian language and literature and studies literary productions from Iran, Central and South Asia. Her work focuses on translation studies, in particular on systems of knowledge transmission through narrative texts (History and fiction) in the Persian, Indian, Arabic and Turkish milieu, and in diverse historical contexts under the impact of religious systems of thought, such as Hinduism, Buddhism, Islam and Sufism. Her field of research relates to the history of Iran and Central Asia (from the Abbasids to Qajar period) and India (Sultanates and Mughals), and the history of the French and English presence in the Persianate world from the 17th century. P. Shahbaz studies historically and comparatively, the intermediary role of Persian as a lingua franca in the translation and transmission of [Indo-] Persian literature into other literary cultures, including the European ones such as English and the French literatures. Her academic research interests also include Shi’ism, the question of gender in the Iranian culture, Persian book art and painting (miniature), and manuscript culture.

Pegah Shahbaz received her PhD from the University of Strasbourg, France in 2014 with a dissertation on “Persian Prose Narratives in South Asia in the Pre-Modern Period”. She worked as a Postdoctoral fellow (2014-2018) at the Sorbonne-Nouvelle, Paris, France, and collaborated with the Perso-Indica project. She is currently a ACLS/ Robert H. N. Ho. Family Foundation Research Fellow of Buddhist Studies and works on her project about the adaptations of the life story of Buddha in Persian literary culture. She will be a SSHRC Postdoctoral Fellow at the Department of Asian Studies from January 2020, to work on a research project about Punjabi and Persian narrative traditions, for a period of two years.

Pegah Shahbaz has taught Persian language and diverse themed courses at French and Iranian Universities. She is the Section Editor of the “Fables and Tales” chapter of the Perso-Indica project (La Sorbonne Nouvelle – Ecoles des Hautes Etudes en Sciences Sociales – Paris), and one of the Associate Researchers and contributors to the DELI Encyclopedic Dictionary of Indian Literatures (MII Iranian and Indian Worlds and CERC Centre for Comparatist Research and Studies) on Persian literary productions of South Asia, as well as an Associate member of the CERIAS (Centre d’Etudes et de Recherche sur l’Inde, l’Asie du Sud et sa diaspora) at U-QAM University, Montreal.

This lecture is part of the Alireza Ahmadian Lectures in Persianate and Iranian Studies. Please register here via Eventbrite.