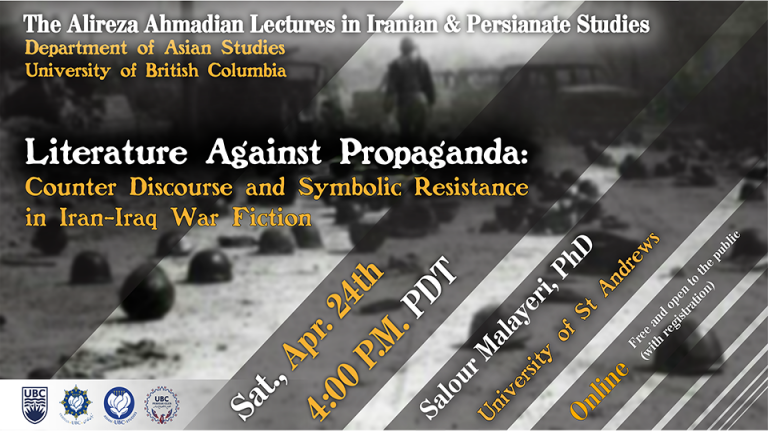 Studies on Iran-Iraq war literature tend to focus on those works which represent the war propaganda of the Islamic regime, known as the ‘literature of the sacred defence’ (adabiyyāt-e defā’-e moqaddas). However, this talk will focus on those stories that offer a different image and provide a space for a critical understanding of the war by challenging the cultural and aesthetic codes of the Sacred Defence literature. This study will use the premises of critical semiotics and discourse analysis theory to examine the extent to which the ideological statements embedded in the Sacred Defence literature are either reproduced or challenged by these literary works. This talk will focus on the first decade of the Islamic revolution (the 80s) when the Sacred Defence discourse was in its most hegemonic stage, and the war was still going on. Dr. Salour Malayeri will examine works from independent writers who tried to give voice to suppressed or marginalised discourses and social groups, works from Javād Mojābi, Mansur Kushān, Amir Hossein Cheheltan, Qāzi Rabihāvi and Taqi Modarresi.

Salour Malayeri earned his PhD in Modern Languages from the University of St Andrews. His PhD thesis focuses on ideology and resistance in Nāser-e Khosrow’s poetry. In his thesis, Salour uses the method of discourse analysis and the critique of ideology to investigate the relationship between the literary tradition and Ismaili discourse in Nāser-e Khosrow’s Divan. Salour is also interested in the history of modern literary criticism in Iran and the dialogue between tradition and modernity in the early 20th-century Persian poetry. His chapter on the literary views of Mirza Fatali Akhundzādeh (Akhundov) has been published by Ginko Library in ‘Iran’s Constitutional Revolution of 1906: Narratives of Enlightenment’ edited by Ali M Ansari. His second publication on Iranian modern literary criticism and poetry focuses on Mohammad-Taqi Bahār’s literary heritage, which will be published by Routledge in an edited volume by Homa Katouzian and Alireza Korangi. Salour has been teaching Persian language and literature in the School of Modern Languages, St Andrews University. Currently, he is working on his monograph, ‘Temporality and Endurance: A Study of Ideology and Resistance in the Poems of Nāsir-i Khusraw’ which is based on his doctoral thesis.