No Heaven for Gunga Din (1965): From Speculative Fiction to Decolonial Option 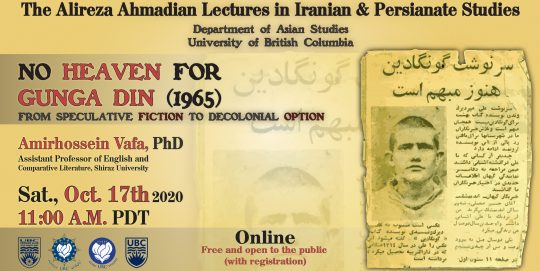 Thank you to everyone who attended the session! You can view the recording on YouTube here. 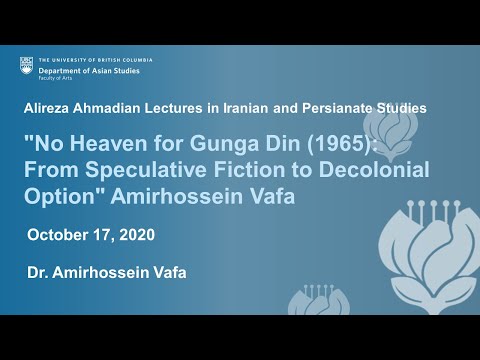 The webinar was presented in English with subtitles for hearing-impaired participants.

Studies of Anglophone literature, or postcolonial writing in English, are often limited to literatures of the Commonwealth and the former colonies of the British Empire. Yet in this talk, our presenter seeks to introduce Ali Mirdrekvandi’s No Heaven for Gunga Din (1965), one of the few cases of Anglophone writing in Iran, a nation which – though never under formal colonial rule – has been deeply shaped by the discourse of colonial modernity.

Ali Mirdrekvandi (1916–1964) was a rural labourer from the western region of Lorestan, who escaped the famine that struck rural Iran in the aftermath of the First World War, and arrived in Tehran during the Allied occupation of the city in WWII. Finding a job as a servant to a regiment of British and American troops, Mirdrekvandi grew an interest in English, and finished the manuscript of a novel which was posthumously published in London: No Heaven for Gunga Din is an allegorical speculation over the imagined aftermath of World War III in the distant future. The protagonist, an Iranian servant named after Rudyard Kipling’s famed Gunga Din, accompanies a regiment of Anglo-American soldiers towards Heaven across the Milky Way Galaxy! Mirdrekvandi’s cosmic journey, in search of “an-other order of thinking” (a concept borrowed from Walter D. Mignolo) does provide a decolonial option to recast contemporary Iranian history, and its problematic sense of worldliness since the advent of colonial modernity.

Amirhossein Vafa is an Assistant Professor of English and Comparative Literature at Shiraz University, and the author of Recasting American and Persian Literatures (Palgrave, 2016). Amirhossein’s recent research has been twofold, but intertwined: To read English Literature as a non-European participant in Anglophone literary studies, and to decolonize the Canon of modern Persian/Iranian literature to unlearn & recast the modern/colonial history of the Middle East region.