The Poetics and Politics of Representation: A Comparative Study of ‘Simurgh’ in Four Royal Manuscripts of the Shahnama 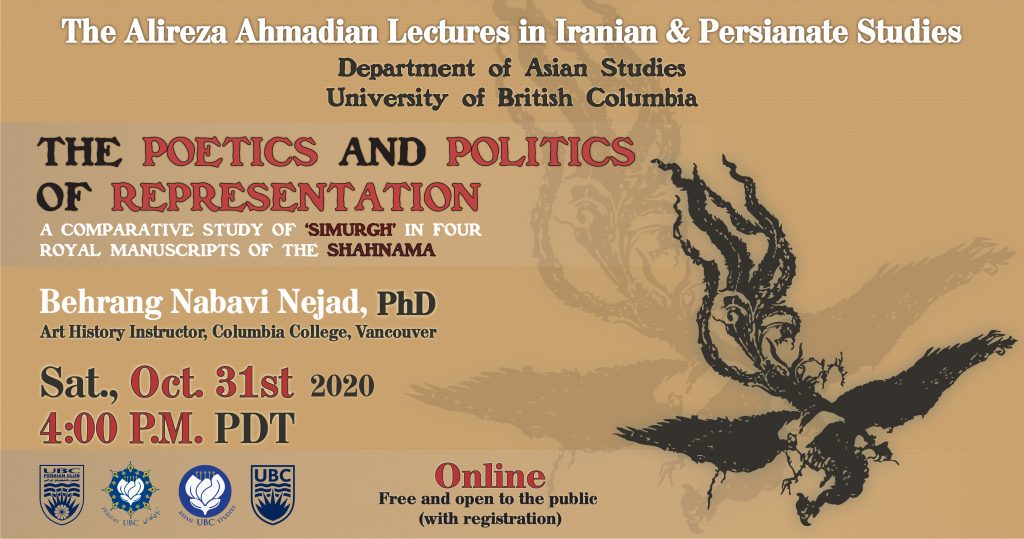 Thank you to everyone who attended! The recording can be viewed on YouTube here.

The fantastic Simurgh, the mythical bird of ancient Persia, has maintained a significant presence in Persian culture. The visual and textual references to this bird manifest a mysterious and complex symbolism shaped around this super-natural creature in Persian literary sources. The Simurgh evolves from a myth, to the symbol of royalty, to the guardian of Persian kingdom, and finally to represent the Divine. This promotion and transformation are facilitated through the idea of divine protection and kingship inherited from ancient Persia, transforming the representations of the Simurgh into powerful images. The intertextual analysis of the Avestan and Pahlavi references to the Simurgh, and their comparison with the characteristics of the Simurgh in the Shāhnāma, has allowed me to trace the amalgamation of these sources in the Persian national epics. Through a process of literary creativity, Firdausi combines the characteristics of the two mythical birds, Saēna and Vāreghna, to shape the Simurgh in the Shāhnāma. In the light of these sources, the representations of the Simurgh are contextualized in this study. Through a close examination of the representations of the fantastic bird in the illustrative program of four royal manuscripts of the Shāhnāma, I argue for an ideologically charged nature for the representations of this bird in these manuscripts. These manuscripts comprise those produced for the Timurid prince, Muhammad Juki (1444-45), and the three Safavid kings, including Shah Tahmasp (1522-35), Shah Ismaʿil II (1576-77), and Shah ʿAbbas I (1587-97). Thus, our presenter suggests that the presence of the royal, divine, and Iranian glory (farr-i īzadī, farr-i Īrānī), sought for by both rulers and individuals (in this case, the artists of the paintings discussed) in the Persian system of thought, charges the representations of the Simurgh in these illustrated manuscripts of the Shāhnāma produced between the fourteenth and the seventeenth centuries.

Although this study deals with literary sources, both in the Avestan and Pahlavi languages and Classical Persian literature, this talk and presentation can be altered to focus on the Shāhnāma as a narrative text, thus becomes accessible and appealing to a wider audience. The extensive examination of illustrated pages of the Shāhnāma through the presentation will further assist its perception by the public.

Dr. Behrang Nabavi Nejad received her PhD in Art History and Visual Studies from the University of Victoria (2017) where she has taught courses on Islamic art and architecture as a sessional instructor. She holds a Master’s degree from the department of Near and Middle Eastern Civilizations, the University of Toronto (2009), and a Master’s in History of Art from Bangalore University, India (2000). She is currently teaching courses on various aspects of art history including Canadian contemporary art at the Columbia College, Vancouver. She has joined the Centre of Comparative Muslim Studies, Simon Fraser University as a research associate in June 2019. Her doctoral research examines the illustrations of royal manuscripts of the Persian national epics, the Shāhnāma through an intertextual analysis of the pre-Islamic written sources and contemporary historiographies. Her research proposes three distinctive iconographic categories for the representations of the mythical bird, the Sīmurgh in Persian painting. Behrang is currently preparing her doctoral thesis for publication. She published the second edition of the ARTiculate, as the editor in chief.