Back home in Beijing last December 19, 2020, third-year UBC student Yuxin Guo  received a pleasant surprise: she was one of 15 winners of the Excellence Award  (优秀奖) for the Chia-ying Yeh and Minsheng Scholarship. Among the 15 winners,  Yuxin is ​the only student ​who hails from a North American university. The  scholarship was started in 2019 by UBC Professor Emerita Chia-ying Yeh, who is  now founding Director of the Institute of Chinese Classical Culture at Nankai  University, and aims to encourage curiosity in young talents for them to study  traditional Chinese culture and Chinese classical poetry. 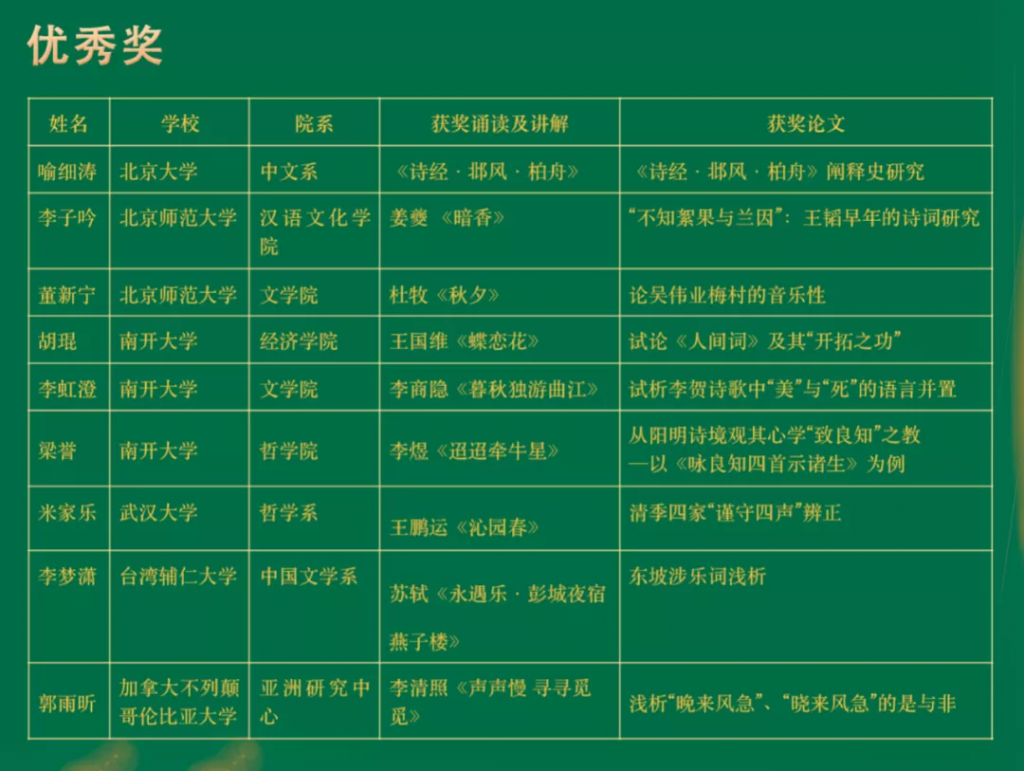 Yuxin’s name and work, listed as one of the winners of the Excellence Award for the Chia-ying Yeh and Minsheng Scholarship

Although a geography major, Yuxin decided to pick up Chinese courses in her  second year of university, wanting to go back to the feeling of her high school  Chinese literature courses. She decided to take CHIN 471, Later Classical Chinese Poetry in the Tang Dynasty, with Professor Xueshun Liu. Taking the class  reminded her of home: her professor was passionate, the subject was familiar,  and at the same time, a more fulfilling learning experience than in high school.

Yuxin’s interest in classical Chinese poetry started in high school, sparked by her  literature teacher, who would often drop anecdotes about the poems and poets  they were studying. Yuxin found herself paying closer attention because of these  anecdotes, and was drawn to the way different poets chose to express  themselves, the uniqueness of each phrase used in each poem. From that point,  her interest deepened, causing her to pick up the subject again once she came  to UBC.

“我觉得表达和意境是最吸引我的地方。它的表达是你再也找不出第二种替代方式的表达。可能某首诗或某首词其中的一个字，或者一个词，它意境中描写的一幅画面，我觉得这是最打动人的地方.” (I think what attracts me the most is  its poetic expressions and its artistic conception. Its expressions are so unique  that they are absolutely irreplaceable. A word, a phrase, a poetic scene  conceived in a poetic line, all these could touch a reader deeply.)
— Yuxin Guo

Yuxin immediately found a major difference studying the subject at UBC. When  she was in high school, she would only study one version of a poem.  Comparatively, at university, her professor would bring up multiple perspectives  and controversies surrounding a single poem, and encourage them to consider  different perspectives and nuances, rather than guide them toward a single  path. Though surprising at first, she came to realize how important it was to  center discussion and debate around these differences in perspective. To Yuxin,  learning this critical mindset was one of her most valuable lessons from this  course. 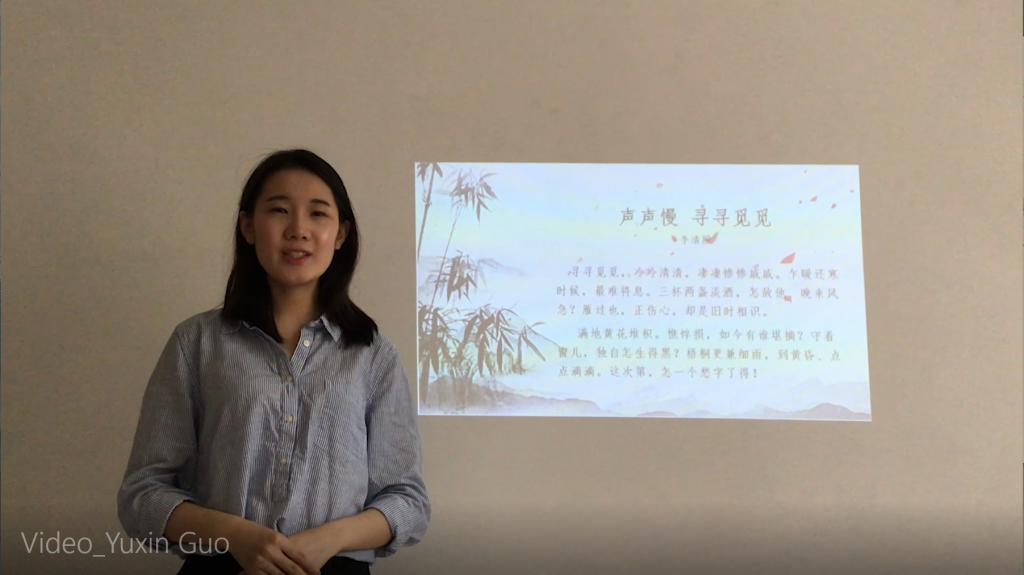 “我觉得在这个过程中，批判心思，或者一种质疑的思维，质疑的精神，就是我觉得学到的非常大的一部分.“ (I think the most significant acquirements that I  have received from this course is a critical thinking mindset, a challenging  spirit, and a questioning attitude.)
— Yuxin Guo

It was this difference in perspective that inspired her application to the Chia-ying  Yeh and Minsheng Scholarship. Unsure what to write about at first, she sought  advice from Professor Liu, and following his advice, decided to follow her  interests. Yuxin chose the poem “Note after Note, Long Song” (声声慢·寻寻觅觅)  from her favourite poet, Li Qingzhao, drawn to the poem because of its  poignance and precision in language.

Wanting to pinpoint an area that hadn’t been previously analyzed, she focused  her discussion on a dispute in the wording of a single line. When she had  learned this poem in China, it was with the line “the strength of the evening  wind” (晚来风急), but many scholars have written the poem with the line “the  strength of the morning wind” (晓来风急). The single difference in character —  dusk (晚) or dawn (晓) — would change the meaning of the poem. It is this  difference that became the focus of her thesis.

Encouraged by Professor Liu, Yuxin decided to narrow the scope of her analysis, curious to see what  conclusions she could draw from the text.

“As a student, Yuxin is highly intelligent and diligent. What is more impressive  is that she is truly serious and enthusiastic about pursuing knowledge,  strengthening her research skills and analytical abilities. She is the kind of  person who values process more than results and thinks that making mistakes  is an efficient way to make progress…When I recommended this scholarship  contest in class, I was very glad that she decided to apply for it.”
— Professor Xueshun Liu, professor of CHIN471 and CHIN473

At the time of her application, Yuxin had just completed her semester, as well as  her two-week quarantine, upon returning home in the summer. It was during  this time that she received an email from Professor Liu, informing his CHIN 473  students about this scholarship. As the summer weeks began, she decided to  dedicate her time into applying. Her perseverance and dedication was evident:  as one of the requirements was to submit a video explaining her thesis, Yuxin  originally wanted to find a classroom to film in, with a whiteboard to help her  explain her topic. Unable to find one due to Covid-19, she settled on using a film  projector on her bedroom wall, using an iPad propped up on a table to film  herself.

Yuxin commended Professor Liu for the support he provided throughout her  application process, from helping her settle on a topic, to fine-tuning the details  of her analysis, to her conclusion. From Professor Liu’s perspective, however, the  success was all hers: “I did not help her much during the application process. I  read her paper several times and gave her comments. After receiving my  feedback, she did further research and made her arguments more solid. She  won this scholarship because of her outstanding ability and hard work.”

It could not be more evident that Yuxin is deserving of this award, thanks to the  support of Professor Liu and her CHIN 473 class, and most of all from her  diligence, curiosity, and dedication. Her appreciation for not just the big picture,  but the smallest details, of classical Chinese poetry rings true in her work.

“To win a scholarship is the recognition of one’s abilities, hard work, and  contribution. It motivates you to work even harder—to acquire more knowledge and skills, to enhance your abilities, and to make more contributions,” notes  Professor Liu. “This scholarship was established in honor of the splendid  contributions to the field of classical Chinese poetry by Professor Emerita  Chia-ying Yeh of this department. It means the world to students who are  interested in classical Chinese poetry at UBC.”

For students such as Yuxin, the Chinese Language Program offers a cluster of  courses that cover Chinese literature and culture, spanning from premodern to  modern periods. Known as the CHIN 450+ courses, these courses enable  students to examine various literary pieces in Chinese with a strong critical  awareness, strengthen their academic writing, and further develop their interest  through opportunities such as the Chia-ying Yeh and Minsheng Scholarship.  Further information can be found both on the ​Chinese Language Program website​ and the ​UBC Academic Calendar​. 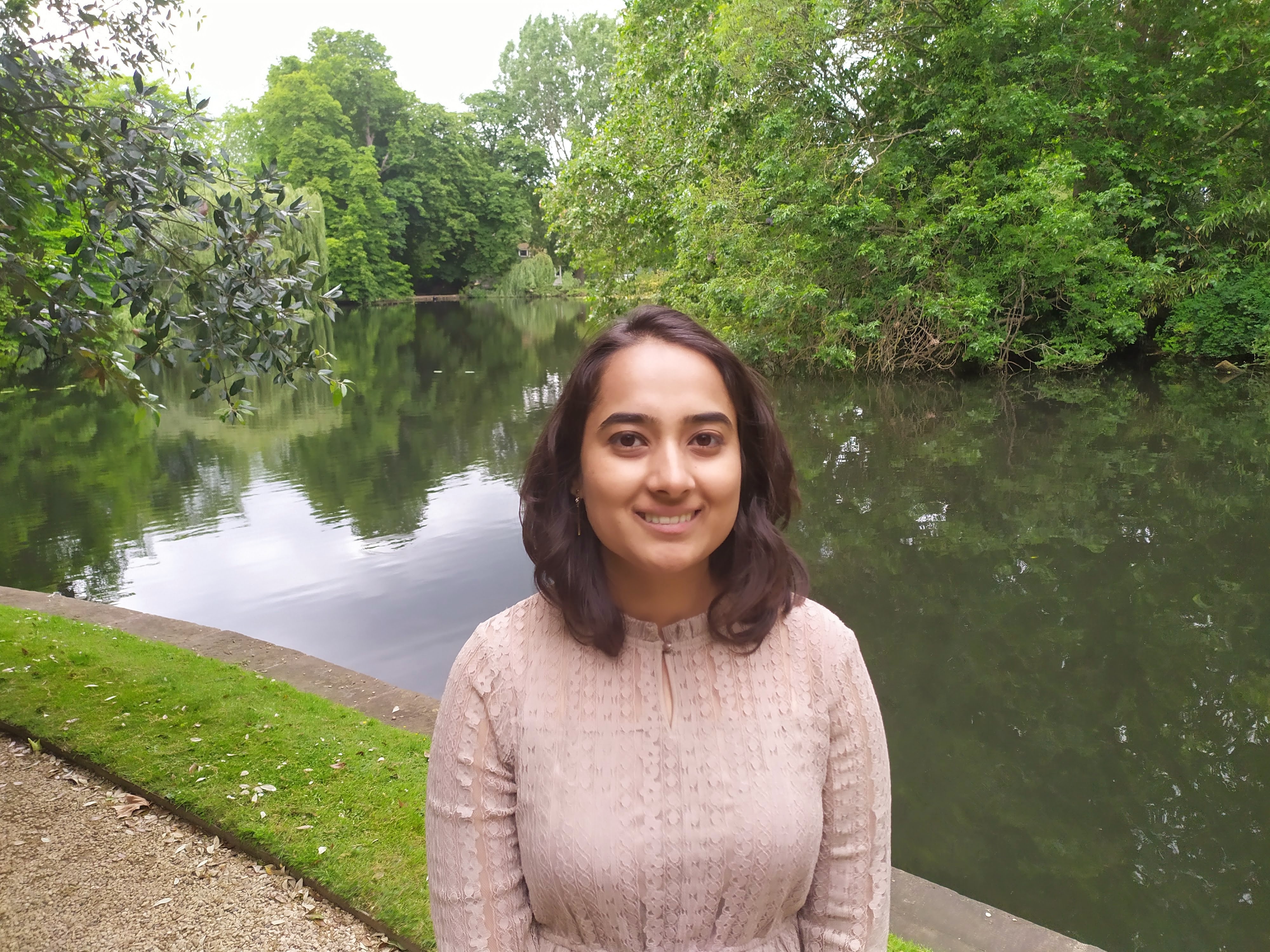 One Wish, One Dish Showcase: A Lunar New Year Celebration 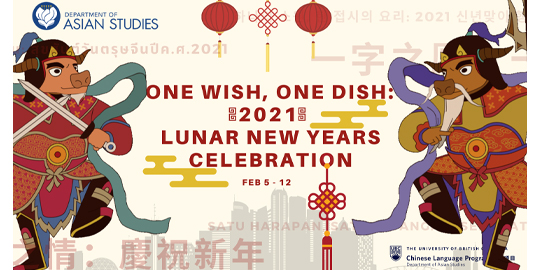 Announcements, Faculty, In The Media, Students