Publication title: An Intellectual History of China, Volume Two: Knowledge, Thought and Belief From the Seventh Through the Nineteenth Century 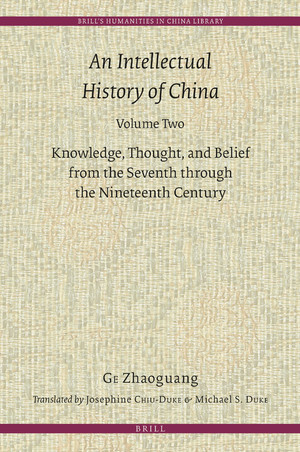 A history of traditional Chinese knowledge, thought and belief from the seventh through the nineteenth centuries with a new approach that offers a new perspective. It appropriates a wide range of source materials and emphasizes the necessity of understanding ideas and thought in their proper historical contexts. Its analytical narrative focuses on the dialectical interaction between historical background and intellectual thought. While discussing the complex dynamics of interaction among the intellectual thought of elite Chinese scholars, their historical conditions, their canonical texts and the “worlds of general knowledge, thought and belief,” it also illuminates the significance of key issues such as the formation of the Chinese world order and its underlying value system, the origins of Chinese cultural identity, foreign influences, and the collapse of the Chinese world order in the 19th century leading toward the revolutionary events of the 20th century.