China’s Chaplin: Comic Stories and Farces by Xu Zhuodai translated and with an introduction by Christopher Rea (2019)

Author:Xu Zhuodai translated and with an introduction by Christopher Rea 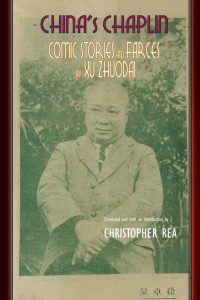 Hoaxes! Jokes! Farces and fun! China’s Chaplin introduces the imagination of Xu Zhuodai (1880–1958), a comic dynamo who made Shanghai laugh through the tumultuous decades of the pre-Mao era. Xu was a popular and prolific literary humorist who styled himself variously as Master of the Broken Chamberpot Studio, Dr. Split-Crotch Pants, Dr. Hairy Li, and Old Man Soy Sauce. He was also an entrepreneur who founded gymnastics academies, theater troupes, film companies, magazines, and a home condiments business. While pursuing this varied career, Xu Zhuodai made a name for himself as a “Charlie Chaplin of the East.” He wrote and acted in stage comedies and slapstick films, compiled joke books, penned humorous advice columns, dabbled in parodic verse, and wrote innumerable works of comic fiction. China’s Chaplin contains a selection of Xu’s best stories and stage plays (plus a smattering of jokes) that will answer the questions that keep you up at night. What is a father’s duty when he and his son are courting the same prostitute? What ingenious method might save the world from economic crisis after a world war? Who is Shanghai’s most outrageous grandmother? What is the best revenge against plagiarists, thieves, landlords, or spouses? And why should you never, never, never pull a hair from a horse’s tail?