From Rural China to the Ivy League: Reminiscences of Transformations in Modern Chinese History co-translated by Josephine Chiu-Duke and Michael S. Duke (2021)

Publication title: From Rural China to the Ivy League: Reminiscences of Transformations in Modern Chinese History 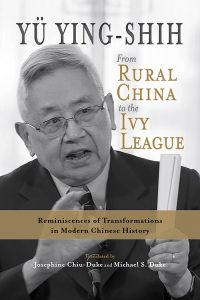 A leading authority in the field of Chinese Studies, Professor Yü Ying-shih received the John W. Kluge Prize for Achievement in the Study of Humanity in 2006 and the inaugural Tang Prize in Sinology in 2014. These awards represent a recognition of his contributions over six decades to the fields of Chinese history, thought, politics, and culture during which time he published over thirty books, forty-one monographs, and hundreds of articles. The awards also serve to highlight his efforts in redefining Chinese intellectual and cultural traditions, imbuing them with new life. These awards honor the way in which Professor Yü has put his intellectual convictions into practice; for example, his criticism of the violent suppression of the Tiananmen democracy movement of 1989 and his decades-long commentaries on Radio Free Asia. Over the years, his works have had great influence throughout the Chinese-language world where he has been hailed as a paradigm of Chinese humanism.

Professor Yü’s book, originally published in Chinese, covers the period from his childhood in rural Anhui Province China to his professorship at Harvard University, and it has been read extensively in Chinese, both in serial form in the Mingbao Monthly and in book form. The book sold more than 10,000 copies in the first month after its publication by Yunchen Publishing Company in Taipei, Taiwan, in late 2018. The book was awarded the twelfth Hong Kong Book Prize in June 2019.

This book, expertly translated by Professors Michael S. Duke and Josephine Chiu-Duke (University of British Columbia), is much more than the memoir of the scholar who has been hailed as the most important living Chinese historian of our times—it is also an invaluable record of a history of our times, witnessing the cultural, political, and social transformations of what Professor Yü notes as the period of the most violent turmoil and social upheaval in modern Chinese history. This complex period is now made accessible to English-language readers, who will also benefit from the helpful notes by the translators. The book also includes rare photos from Professor Yü’s personal collection.