Mind and Body in Early China by Edward Slingerland (2018) 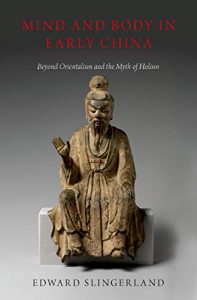 Mind and Body in Early China critiques Orientalist accounts of early China as the radical, “holistic” other. The idea that the early Chinese held the “strong” holist view, seeing no qualitative difference between mind and body, has long been contradicted by traditional archeological and qualitative textual evidence. New digital humanities methods, along with basic knowledge about human cognition, now make this position untenable. A large body of empirical evidence suggests that “weak” mind-body dualism is a psychological universal, and that human sociality would be fundamentally impossible without it.

Edward Slingerland argues that the humanities need to move beyond social constructivist views of culture, and embrace instead a view of human cognition and culture that integrates the sciences and the humanities. Our interpretation of texts and artifacts from the past and from other cultures should be constrained by what we know about the species-specific, embodied commonalities shared by all humans. This book also attempts to broaden the scope of humanistic methodologies by employing team-based qualitative coding and computer-aided “distant reading” of texts, while also drawing upon our current best understanding of human cognition to transform our basic starting point. It has implications for anyone interested in comparative religion, early China, cultural studies, digital humanities, or science-humanities integration.