One Left, co-translated by Bruce Fulton and Ju-chan Fulton (2020) 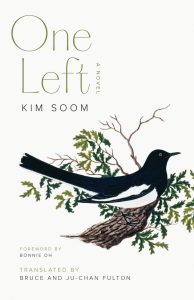 During the Pacific War, more than 200,000 Korean girls were forced into sexual servitude for Japanese soldiers. They lived in horrific conditions in “comfort stations” across Japanese-occupied territories. Barely 10 percent survived to return to Korea, where they lived as social outcasts. Since then, self-declared comfort women have come forward only to have their testimonies and calls for compensation largely denied by the Japanese government.

Kim Soom tells the story of a woman who was kidnapped at the age of thirteen while gathering snails for her starving family. The horrors of her life as a sex slave follow her back to Korea, where she lives in isolation gripped by the fear that her past will be discovered. Yet, when she learns that the last known comfort woman is dying, she decides to tell her there will still be “one left” after her passing, and embarks on a painful journey.

One Left is a provocative, extensively researched novel constructed from the testimonies of dozens of comfort women. The first Korean novel devoted to this subject, it rekindled conversations about comfort women as well as the violent legacies of Japanese colonialism. This first-ever English translation recovers the overlooked and disavowed stories of Korea’s most marginalized women.