Author: by Su Tong and Translated by Michael S. Duke 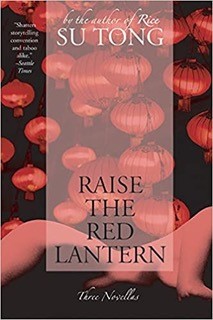 The brutal realities of the dark places Su Tong depicts in this collection of novellas set in 1930s provincial China — worlds of prostitution, poverty, and drug addiction — belie his prose of stunning and simplebeauty. The title novella, “Raise the Red Lantern,” which became a critically acclaimed film, tells the story of Lotus, a young woman whose father’s suicide forces her to become the concubine of a wealthy merchant. Crushed by loneliness, despair, and cruel treatment, Lotus finds her descent into insanity both a weapon and a refuge.

“Nineteen Thirty-Four Escapes” is an account of a family’s struggles during one momentous year; plagued by disease, death, and the shady promise of life in a larger town, the family slowly disintegrates.

Finally, “Opium Family” details the last years of a landowning clan whose demise is brought about by corruption, lust, and treachery — fruits of the insidious crop they harvest.