The Catcher in the Loft, co-translated by Bruce Fulton and Ju-Chan Fulton (2019)

Publication title: The Catcher in the Loft 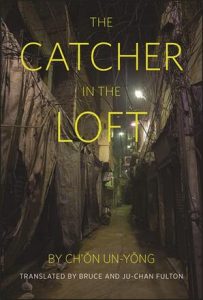 Inspired by the case of a torture specialist in 1980s South Korea who from 1988 to 2000 was a fugitive in his own house, The Catcher in the Loft (published in South Korea in 2011 as Saenggang) is in equal parts a portrait of a man coming to terms with his notorious past and a coming-of-age story centered in his dependent relationship with his college-age daughter, who has always thought of him as a patriotic policeman. The novel begins at breakneck speed, with a victim perishing under the torture artist’s (renamed An) watch, and a hurried decision that An must take cover. The remainder of the novel is a dual narrative related in turn by the torture artist and his daughter, Sŏn, who must harbor her father in a loft above her room. There follows a counterpoint of concealment (An) and revelation (Sŏn), with the daughter discovering the “festival” of her own body during an infatuation with a university classmate, followed by the sobering knowledge, manifested firsthand in her encounter with one of her father’s shattered victims, that the father she had idolized is a sado-masochist reduced to abject dependence on her for all of his daily needs during his concealment in the loft. When the novel ends, years later, the focus is equally on An’s ultimate capitulation (he turns himself in to the authorities) and Sŏn’s awakening to her autonomy.