Zoe Lam in our Cantonese language faculty shares her love of the language with everyone she teaches, from beginners to advanced learners! However, she was recently interviewed by the Toronto Star about a particular class: adults whose parents spoke Cantonese to them as children but who grew up using English as their first language (due to schooling, living in Canada, or other external factors). We thought it was such an interesting article that we sat down with Zoe to learn a little more.

Journalist Wanyee Li attended one of Zoe’s classes, and wrote of her experience:

“Neih sihk jo faahn meih ah?” I force the sounds out of my mouth. The words feel foreign.
It’s Saturday and I’m sitting at the back of a small classroom on the third floor of a heritage building in Vancouver’s Chinatown. I and two dozen other adults bravely recite common greetings in Cantonese, following the instructor’s cues.
We’re here to learn Cantonese.
That afternoon, I speak more of my ancestral language than I have in my life — as far as I can remember, anyway. My parents tell me I spoke Cantonese as a toddler, and that I only learned English once I started going to kindergarten.
But by the time I was seven, I had stopped speaking the language altogether. Today, I have no recollection of ever speaking it.
I still understand dinner-table conversation and casual gossip — I can even recognize simple characters and some food items on dim sum menus.
But I’ve never been brave enough to utter words in Cantonese. I knew that if I did, my butchered pronunciations would betray how “un-Chinese” I had become.
Cantonese, the Chinese dialect traditionally spoken in Hong Kong and parts of southern China, is an endangered language, says instructor Zoe Lam. We’re sitting in the Wong Benevolent Association’s lounge after Saturday’s class, sipping tea.
Many millennials of Cantonese heritage who were born in Canada are self-conscious about their “Canadian” accent due to a combination of racism from dominant mainstream society, as well as pressure from their own families, Lam says.
At school, we were too Chinese.
“They would do everything to not eat Chinese food at school because people would laugh at them,” said Lam.
We hid our lunches. We said we only spoke English.
But then there were times when we were not Chinese enough.
“A lot of Chinese-Canadian students were traumatized when they were little,” said Lam. “Maybe their cousins or other relatives from Hong Kong laughed at them — saying things like, ‘Oh my God, you said it wrong; your Cantonese is so horrible.’ ”
Lam has taught dozens of Cantonese classes in her decade-long career, but none are as special to her as the one she teaches on Saturdays — a survival Cantonese class for adults.
Most who sign up for the class have an existing connection to Cantonese culture, whether they grew up in a Cantonese-speaking household or have a spouse who speaks Cantonese.
“It doesn’t just feel like a job to me,” said Lam. “It feels like it’s important work. It’s something that may impact a person’s life.”

Zoe is pictured second from left in a photo courtesy of The Youth Collaborative for Chinatown.

Can you tell us how you came to teach these Cantonese language classes for adults? How long have you been doing it for?

As Cantonese (the variety of Chinese traditionally spoken in Hong Kong and parts of southern China) is gradually in decline, I wanted to find a way to revitalize it. I started out in 2014 teaching a beginners community class at the Centre A Gallery in Chinatown — and after attendees spread the word — started teaching the adult class in the former Mon Keang School building in Chinatown in collaboration with the Youth Collaborative for Chinatown.

My students are primarily adults who grew up with their parents speaking Cantonese to them, but living in Canada, they quickly found that they were socialized to use English as their first language, and largely were often bullied at school into speaking English, so their Cantonese lapsed and is often associated with traumatic feelings of shame. Some also expressed that they also experienced older relatives embarrassing them if they tried to speak or remember Cantonese growing up, but didn’t quite get it right. If I were to estimate, I would say my classes are comprised of: 60% people connecting to their roots, or wanting to talk with senior relatives; 30% who have spouses who speak Cantonese and wanting to communicate better with their in-laws; and 10% language enthusiasts. An enjoyable aspect of these classes are that many students still understand it if they hear it, but can’t speak it well; so, rather than monotonously teaching Cantonese, it makes me happy that these classes are, in a way, providing a “safe space” for them to practice speaking it. I also take the classes on field trips around Chinatown so that they are able to apply what they have learned immediately in authentic contexts: for example, ordering dim sum. 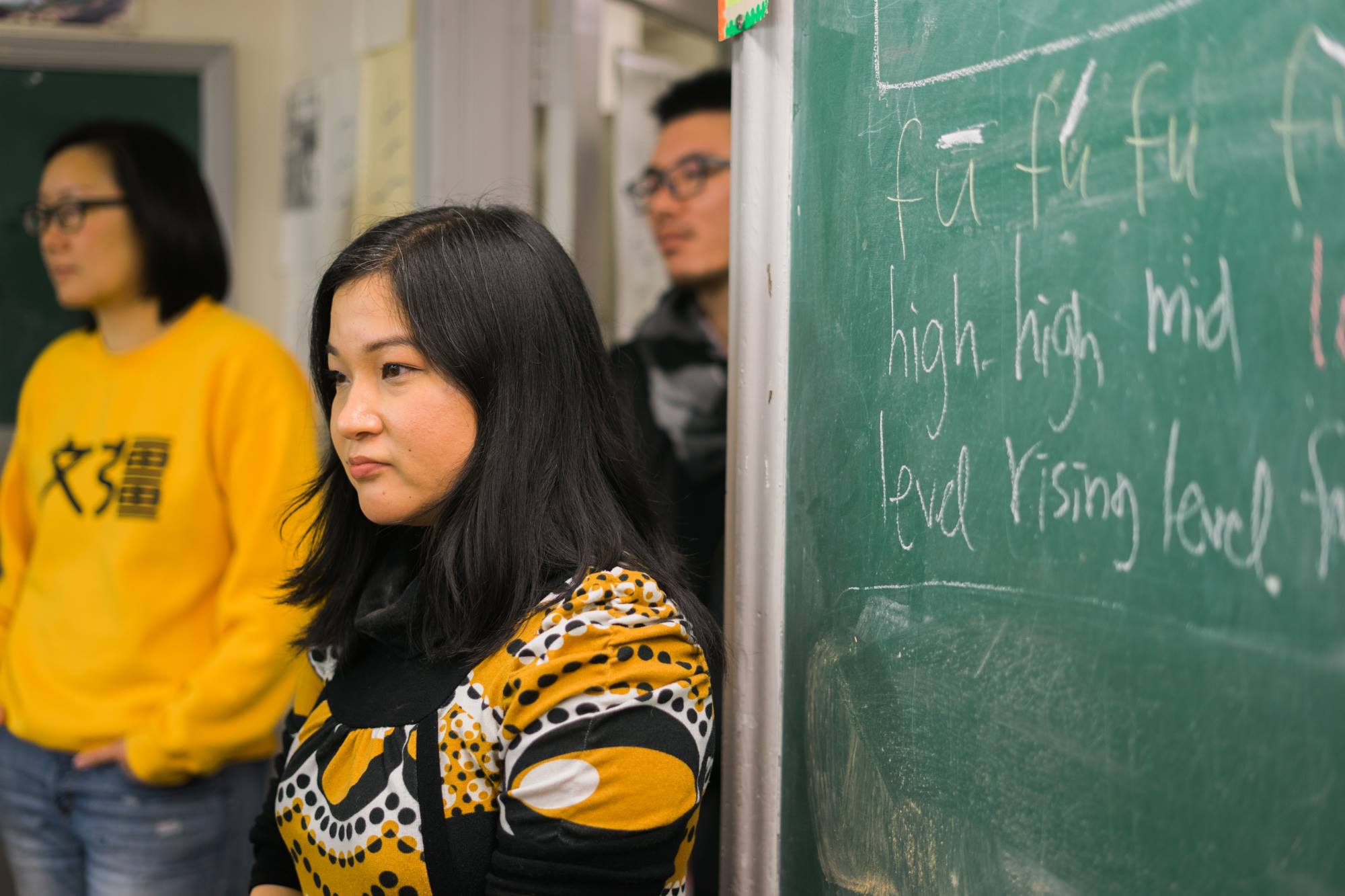 Photo courtesy of The Youth Collaborative for Chinatown.

We understand that your PhD was about second-generation Cantonese speakers in Canada. Can you tell us a little more about that?

For my PhD (completed in 2018), I explored how much of the language was still “buried inside” people who spoke it as children but used English as a first language as adults. Participants listened to different Cantonese words being spoken (for example, “elephant” 象 zoeng6 and “sauce” 醬 zoeng3) and then had to distinguish what was said. I found that largely, people were still able to correctly identify the word when hearing it, but they showed confusion patterns that differed from Cantonese speakers from Hong Kong.

Photo courtesy of The Youth Collaborative for Chinatown.

How have you found you have benefited from teaching these classes?

I found that my experience teaching this class has also greatly assisted with my teaching at UBC. Taking the lessons learned from teaching the Chinatown classes, I hope to foster a continual cultivation of the “safe space” atmosphere for my students in CNTO 301 who share similar backgrounds and experiences to my students at Mon Keang. Despite the Chinatown classes having a brief 8-week length, the aim is to motivate people to continue learning Cantonese. From these classes, I noticed that students formed great friendships and bonds over their similar situations; many of our alumni joined a Facebook group where they stay in touch and discuss what they’ve learned. I like to tell my students: “as long as you keep speaking and studying Cantonese, you are playing a role in keeping the language alive.” I hope to continue the growth and aim to cultivate the future for the Cantonese language through both my Chinatown classes and my UBC courses: CNTO 301 and 303.

TAGGED WITH
Faculty
In The Media
Students
Cantonese