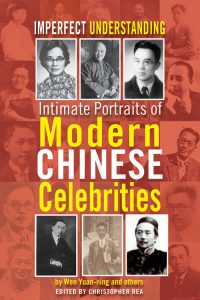 What did it mean to be a celebrity in 1930s China? Who were Republican China’s preeminent intellectuals, writers, artists, politicians, diplomats, and businesspeople, and how were they represented in the popular press? This anthology brings together fifty rediscovered essays, written in English in 1934, which offer fascinating, close-up profiles of a constellation of celebrities. From the warlord Han Fuju to the Peking Opera star Mei Lanfang to the intellectual leader Hu Shi to the novelist Lao She to ambassador Wellington Koo to the Singaporean Chinese entrepreneur Lim Boon Keng to the deposed Qing Emperor Puyi, the series presents a panorama of Chinese elites. Imperfect Understanding constitutes a significant archival discovery, a unique artifact of the pre-war heyday of Anglophone literary culture in China.

Imperfect Understanding: Intimate Portraits of Chinese Celebrities is both an entertaining work of literature, by turns comedic and touching, and an important historical document. Its sketches represent influential Chinese historical figures, warts and all, in the eyes of contemporary observers seeking to provide readers an alternative to the autobiographical puffery of popular books like Who’s Who in China. Christopher Rea’s introduction offers new research on the forgotten literary figure Wen Yuan-ning and argues that one of the essays published under his name was written anonymously by a young man who went on to become one of modern China’s literary giants: Qian Zhongshu. This edition of Imperfect Understanding also includes multiple reviews of Wen’s book, brief biographies of the subjects of the Critic series, and a bibliography of further writings by and on Wen Yuan-ning.