Publication title: Peace Corps Volunteers and the Making of Korean Studies in the United States 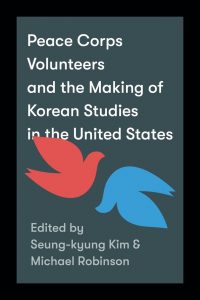 From 1966 through 1981 the Peace Corps sent more than two thousand volunteers to South Korea, to teach English and provide healthcare. A small yet significant number of them returned to the United States and entered academia, forming the core of a second wave of Korean studies scholars. How did their experiences in an impoverished nation still recovering from war influence their intellectual orientation and choice of study—and Korean studies itself?

In this volume, former volunteers who became scholars of the anthropology, history, and literature of Korea reflect on their experiences during the period of military dictatorship, on gender issues, and on how random assignments led to lifelong passion for the country. Two scholars who were not volunteers assess how Peace Corps service affected the development of Korean studies in the United States. Kathleen Stephens, the former US ambassador to the Republic of Korea and herself a former volunteer, contributes an afterword.