Publication title: Perception of Lexical Tones by Homeland and Heritage Speakers of Cantonese 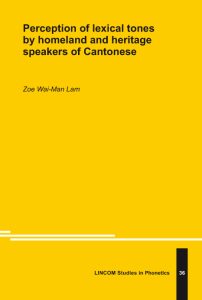 Perception of Lexical Tones by Homeland and Heritage Speakers of Cantonese compares the lexical tone perception abilities of two populations with different bilingual configurations: Cantonese-dominant adults who grew up in Hong Kong (referred to as homeland speakers), and English-dominant adults who grew up in a Cantonese-speaking household in Canada (heritage speakers). From infancy both were exposed to Cantonese as a first language in terms of chronological order; however, after the onset of schooling, each became dominant in the majority language of their respective society.

Given this background, this research project investigates whether heritage speakers’ perception of lexical tones of a non-dominant first language (Cantonese) exhibits cross-language effects from a dominant second language (English) that does not have a contrastive dimension of tone. Results of a series of perception experiments indicate that homeland speakers have a significantly greater ability to distinguish tonally contrastive words by solely relying on tonal information. Both groups showed confusion of overlapping subsets of tone pairs, but heritage speakers had a higher error percentage, which suggests a quantitative but not qualitative difference between the two groups. Lastly, the two groups used different listening strategies in tone identification.